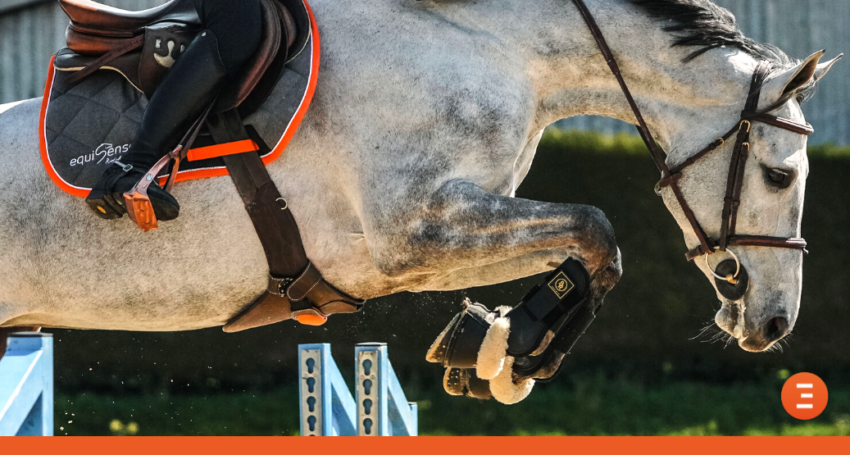 Tendon boots, fetlock boots with one or two shells, full cross country boots, polo bandages, exercise bandages… There are many options to protect your horse’s limbs.

Even if sheepskin boots are more attractive aesthetically, are they really beneficial for your horse in hot weather? In this article, we answer all your questions.

Scientists have studied the action of boots and bandages on horses’ limbs and their consequences. Let’s analyse the results of these studies together, and determine which pads are the most appropriate for your training sessions.

For this article, we have gathered the different scientific results of the effect of boots and bandages on the limbs of horses and their consequences.

Let’s start with some anatomical review: to understand the impact of boots and bandages on the limbs, let’s talk about the limb first. Made up of bones, tendons and ligaments, this part of the horse’s body is, unlike others (such as human limbs), not very muscular.

It is the ligaments and tendons that allow the horse to move. Their great resistance (up to 2000 kg) [1] allows them to accumulate energy when they move.

The 3 main ligaments and tendons of horses are

In this article, we will focus on the superficial digital flexor tendon (SDFT), or perforator tendon (in orange below).

The energy accumulated in the tendon is restored by the movement thanks to the elasticity of the tendon. However, as nothing in nature is perfect, the tendon is never 100% elastic. This means that part of the accumulated energy is released as heat (between 5 and 10%)[2].

Couldn’t this energy released in the form of heat endanger certain cells of the tendon, and thus cause tendonitis?

📚 On the same subject: my horse has tendonitis, how bad is it?

By studying racehorses during exercise, a study team measured temperatures of up to 45°C in the heart of the perforated tendon[3]. Back in the laboratory, they exposed the same cells that protect the tendon to different temperatures over different periods of time.

The study found that tendon degeneration could be caused by chemical reactions in the area following repeated exposure to heat.  Heat is responsible for reactions which can lead to deterioration of the tendon area [4].

To make matters worse, tendons aren’t very vascularised, so the blood supply to the tendons is not as good.  The diffusion of heat in the limb is slowed down, resulting in excess heat localized in the tendon, causing deterioration of the tendon area.

Why is this important? Well, if the tendon area is damaged, it exposes the tendon to deterioration, and in the long run, opens the way to possible tendonitis.

All of these findings are interesting, but how do we minimize this process?

In a word: cold. Lower temperatures minimize the chemical reaction and thus the death of the cells. Cooling the limbs seems to be a simple but effective way to fight tendonitis.

Imagine if the naked limb cannot cool itself effectively, what about the protected limb?

In the various studies on the temperatures of the protected limbs of horses, several types of protections have been used:

They all come to the same conclusion: polo bandages cause the greatest increase in temperature[5], followed by other types of boots (leather, sympatex, neoprene) before finishing with the naked limb, which recorded the smallest increase by far.

Naked limbs therefore minimize the risk of overheating on the tendons[6].

However, this is not a reason to leave your horse unprotected during training or when he is out in the paddock, especially when it is shod. Even if protecting the limbs causes an overheating of the cells, at a more or less high extent on the tendons, it is not negligible for some horses, as it allows shock absorption.

Materials and shapes must be taken into account when purchasing your boots. It would seem that perforated boots allow for more efficient cooling. Moreover, you must be careful with the ergonomics of the protection: if they limit the circulation of the blood flow, the area of the tendon, badly supplied in blood, will be all the more sensitive to heat, and thus to the degradation of its cells.

Hence why cooling the limb after exercise is so important, even more so if it was protected by a boot or bandages[7].

4. What kind of protection should I choose?

As we have already demonstrated, you should not overprotect your horse. Nevertheless, depending on the profile of your horse, and the discipline practiced, it is essential to protect the limbs to avoid any injury. But then, which type should you choose?

There are 2 kinds of bands for your horse. They both have the same functionality: to protect the tendons and suspensory ligaments at different levels of support.  They are mainly used for flatwork and dressage sessions and are forbidden on competition grounds (except in the paddock).

They are not the best protection for hot weather, but they are very useful for horses with sensitive skin.

Polo bandages:
This first type of band is pretty simple. Unlike the work bands, they are not applied with a flannel. The main advantage of polo bandages is their polar material. They reduce the risk of rubbing and injury for a horse that is sensitive to neoprene.

Working bandages:
They are more complicated to put on, and must be handled by competent hands because consequences can be severe if the pressure is badly distributed. They provide better support than polo bandages, and have the advantage of aborbing shocks.

Open or closed, they protect the tendons and the fetlock, and are mainly used in jumping to protect horse limbs against impacts with the fences. They come in different sizes and must be very well fitted to avoid injuring your horse and hindering its movements.

Open boots:
Open boots mainly protect the tendons on the lateral and rear areas of the tendon and fetlock. This type of protection avoids areas of contact and friction between the two front legs or between a front leg and a rear leg.

Closed boots:
Closed boots are mandatory during a cross country course, as they protect the entire limb. They completely cover the limb and the majority of the fetlock, insuring a more complete protection than open boots.

This type of protection protects the pastern and the glomes of your horse from various shocks. They are used in particular for horses that have an excess of engagement of its hindquarters during its movements, therefore touching the heel of its foreleg.

No matter what type of protection you choose for your horse’s training, you must first of all pay attention to the material and the shape of the protection to avoid injury.

Choose breathable materials such as neoprene for example. If your horse is sensitive, sheepskin is also a good choice, but be careful not to wear them too often or in hot weather.

Finally, do not underestimate the ease of maintenance of your protections: dead hair, mud, sand, could hurt your horse.

At the end of each session, don’t forget to shower your horse or use cooling boots after your training session to avoid overheating the tendon. You can also massage the muscles to improve blood circulation to allow it to cool quicker.

Protective equipment is therefore not only responsible for localized heating of the tendon, but also prevents any natural cooling of the limb by convection. Coupled with intensive exercise, the protections generate high temperatures locally. These temperatures affect the integrity of the metabolism of the tendon area, and can cause tendonitis when exposure to such temperatures is recurrent.

In addition to the impact of protections, these studies underline the importance of an effective cooling of the limbs, requiring an external action (shower, immersion, cold boots) so that they return to their initial temperature.

Of course, it is necessary to protect the horse from shocks during training to avoid any other risk of injury. For competitors, protections remain mandatory and essential for certain events. You now have all the keys in hand to choose yours.