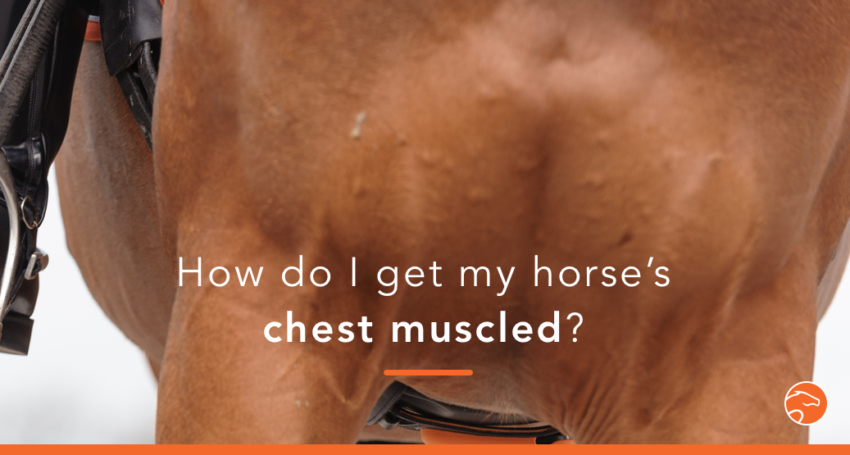 Are you fed up with your horse’s chest not being muscled enough? And thus dream of him having an incredibly muscled forehand with a chest worthy of a body builder? Come over here, I have what you need. 😁

We often refer to neck, back, abs and buttocks muscles but rarely to chest muscles. And yet without these muscles, the horse would simply not be able to stand up. No jokes! I explain why.

📚Extra reading on your horse’s muscles:

3 exercises to strengthen your horse’s shoulders

3 tips to efficiently build back muscles

The chest of the horse corresponds to his pectoral muscles

Oh yes, the same as for us! The muscles between the two arms are the pectorals!
They have the same functions as our pecs. Indeed, they are adductor muscles! Meaning, their role is to bring the arms back to the central axis of the body. It is the same the horse, the pectorals allow him among other things, to cross his forelimbs.

No chest… No horse!

After “No abs, no back” it is time for “No chest, no horse”. In fact, the horse is very unique. He does not have a collarbone!

“Yes well, the collarbone does not have a lot of use except to be broken when falling on a cross country fence!” (Personal testimony – it hurts)

Our shoulder. The collarbone connects the upper limb to the rest of the body. For the horse, the link is made only by muscles.

Consequently, due to the horse not having a collarbone, its forelimbs are connected to the rest of his body only through muscles. His head, neck and thoracic spine are “floating”.

On the other hands, the hind legs of the horse are firmly attached to the spine through the pelvis and especially through the sacro iliac joint.

What about the pecs?

Indeed, they are the ones “playing the role of collarbone”. Thus, they connect the forelimbs to the trunk thus, to the rest of the body.

The term “pectoral” is rather unclear. It is a groupement of several muscles (schematized in green on the diagram below): the ascending pectoral muscle, transverse pectoral, descending pectoral and subclavian muscle (pectoral scapular).

We call them the levator muscles of the trunk

The pectoral and serrated muscles attach to the inside of the scapula and humerus. They then settle on the ribs or on the sternum. It creates a muscular strap, a hammock that carries the trunk between the two previous. This is why we call them “levator muscles of the trunk“.

These are not exactly part of the chest muscles but they do have the same role therefore, I will tell you a little about it. In the drawing below on which the scapula was removed, we can see very well the serrated muscles. They stand inside of the scapula (top) and moor on the last cervical vertebrae and first ribs. Their contraction will therefore “upper” the trunk and the base of the neckline situated between the two forelimbs.

These muscles fit on the top of the humerus (the upper arm, like ours) and make the connection to the sternum. Their role is to lift the trunk as the serrated muscles. And as told above, they will also have addictive action. They allow the horse to bring his foreleg inwards.

This group of very powerful muscles is highly necessary for the carrying capacity of the forehand. The pectorals muscles cause this ” rising withers ” feeling while the serrated ones allow to go up from the base of the neck to adopt an “collected” attitude. Their work is therefore essential for a good collected work quality.

Little anecdote. You probably already noticed that some horses that get started very late (7-8 years) will still grow a little. Well it’s purely muscular! With the training, the serrated and the pectoral muscles are toned up therefore, they will make the bust rise above the forelimbs. This makes the withers rise a few cm!

So, how exactly can I get my horse’s chest muscled?

Exercises #1 – Get the head down

Yes, as for the abs and the back! In fact, by lowering his head in a dynamic exercise (not just grazing), the forehand of the horse will be overloaded. The pectorals and the serrated will thus contract eccentrically to resist the imposed overload and therefore, develop!

A good reason to start or finish your session with 5-10 minutes of active trot with the nose down in a relaxed attitude!

In this case, it will be the pectorals that will be trained. They will work in concentric contraction because remember, they are adductor muscles, they are the ones that make the forelimbs the cross!
On a lateral movement, when the left foreleg passes in front of the right foreleg, it is the pectorals on the left that allow this movement.

You can train on all lateral movements (shoulders in, haunches out, head to wall, etc.).

Moreover, these dressage trainings are also very useful for jumping horses. We will see that right away since the pecs are very useful to the jumper.

Once again, while jumping, you train the pecs muscles!

When the horse jumps, the pectorals contract in two ways:

You can do lots of bounce jumps, it’s great for both chest and abdominals!

The pectoral will participate to the “flight phase”. It corresponds to that jumping moment when the horse bends very tightly its forelegs

Have you ever noticed that some horses are slightly get their knees closer while others are spreading them? Well, those who get them closer are those who contract their pectorals! Indeed as I explained to you before, the pectorals with their adductive action can bring the two humerus closer to the central line. At the time of trousser, if the pectorals are contracted, it allows a greater flexion of the forelegs and a rapprochement of both knees.

This was how I get my horse fit! I do so by training with a lower head position, doing lateral movements and jumping. Trust me, after all this his forehand will get stronger. He could even gain in elevation! The motion will help you check that out!

Till the next article!

Such a great simple explanation. Great diagrams and easy for everyone to understand. Brilliant!