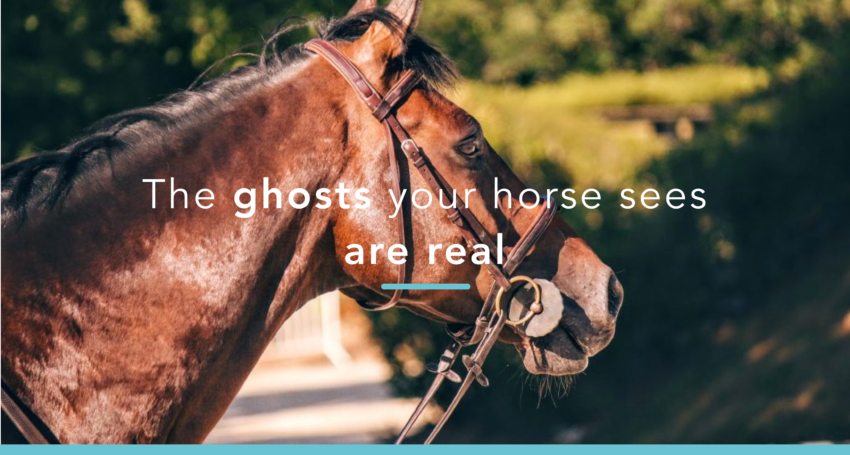 Does your horse see ghosts in the arena, and when you’re hacking too? Don’t be mad anymore because they are real! It’s just that you don’t see them! And yes, despite the fact that horses have the same senses as us, their abilities are very different from ours, sight and hearing first!

Let’s deconstruct horses 5 senses to try and understand what’s going through their head!

We have already written an article on the sight of horses, so I’ll let you read it again if you want to know everything about it. It’s over here. –> 6 questions we all asked ourselves about the horses sight.

Why did we start with sight? Because it is the most important and most developed sense in humans. Therefore we tend to look for what our beloved companion has actually seen. Horses, on the other hand, will not use their sight first but rather give more importance to its other senses.

Apart from the pinna, which is mobile in horses, the ears of humans and horses are quite similar.

What are the differences between horses and us in terms of hearing?

Horses hear frequencies ranging from 55Hz to 33,500Hz [1] (of course, as with us, hearing depends on the individual). In humans, the hearing range is from 20 to 20,000Hz [1]. Horses will therefore hear a whole range of high-pitched sounds that we do not hear. However, some low-pitched sounds that we can hear will not be perceived by horses (such as the last keys of a piano 🎹).

Let’s move on to smell! It seems to be one of the most important senses in horses, especially from far away. I say “it seems” because there are very few studies that have been done on the subject.

Let’s start at the beginning, how does the sense of smell work?

They are small volatile molecules present in the air. They are aspirated on inhalation and are trapped in the olfactory epithelium by mucus (part of the nasal cavity). They are then identified by the olfactory cilia which send the nervous message to the brain.

How is the horse’s sense of smell better than that of a human [5]?

In addition to the sense of smell, horses have an extra string to its bow: the Jacobson’s organ (or vomeronasal organ) which has almost completely disappeared in humans. This organ enables them to analyse pheromones.

These molecules are larger and therefore less volatile than odorous molecules. They are molecules comparable to hormones (the body’s chemical messengers) and they can be found in urine for example.

They play an essential role in mating, (for example: to enable the stallions to detect a female in heat) but also it is also useful to enable the mare to impregnate herself with her foal. When horses try to analyze and/or memorize a smell they adopt a characteristic position that you have certainly already seen: the Flehmen

This could also explain why horses feel our feelings! For example, when we are scared, we emit pheromones that horses can pick up. Horses will therefore detect many more smells and pheromones than we do.

Smell will even be horses preferred sense for long distances.

Taste is a sense that is closely related to smell. You have certainly already experienced it. Try to eat something by blocking your nose, you will only taste 4 tastes: sweet, salty, bitter and acid. All the other sensations actually come from your sense of smell! Horses also have the taste buds that detect these 4 tastes.

If you have ever observed your horse grazing grass, you have certainly noticed that they choose where they eat carefully, this is because they have a wide variety of tastes at their disposal so they choose what type of grass they want to eat! This sense is something that is often lost when they eat their food in their stall.

And finally, touch: one of the main senses of horse-rider communication [5].

Just like the human body, a horse’s body has different sensitivities in different areas. In fact, there is a very interesting experiment to be done. Ask your (human) guinea pig to close its eyes. Put two fingers 2-3 cm apart on their back and ask them how many fingers they feel. Repeat the operation on their nose or cheek. If they are normally formed, they will only feel one finger in the first case and two in the second.

In humans the areas of the head are therefore much more sensitive than those of the back. In horses it is the same with the most sensitive areas being the lips and the vibrissae. Horses will therefore be more sensitive to the hand than to the legs!

The sensitivity of the same place will also be different between each horse, a horse with thick skin and very hairy will be less sensitive than a thoroughbred for example. Tactile sensitivity can be measured by the filament test. There are 4 types of filaments of an increasing diameter which are applied perpendicularly to the withers one after the other. You can see at which filament diameter the muscles are quivering. The larger the diameter, the less sensitive the horse will be. Two different individuals will therefore not feel the aids in the same way, which will result in great variability in the response to the aids [1].

Touch also seems to be an important part of social relationships between horses. We often see horses scratching each other’s withers for example.

Next time your horse sees a ghost, ask yourself what your senses have failed to detect! A sound too high-pitched for our ears (a bat?), a disturbing smell (smoke?), an interesting smell (a female in heat?), an animal that is afraid?