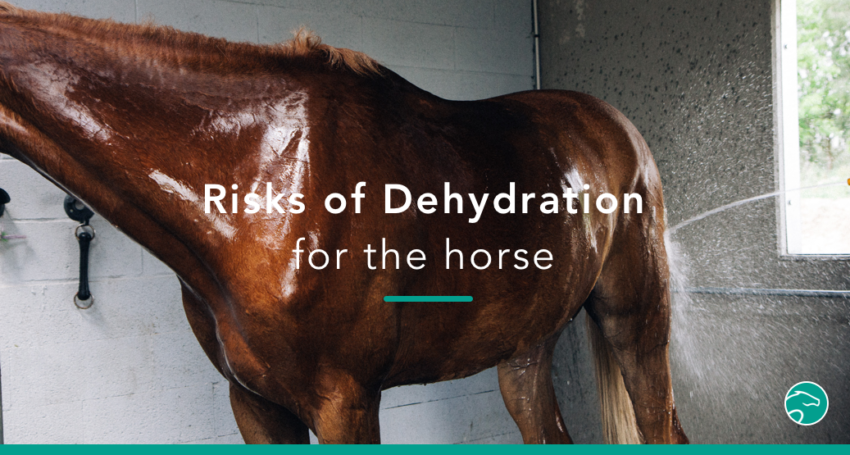 Summer is just around the corner, or almost… But did you know that your horse can also sweat and dehydrate in winter? So now’s the perfect time to go over perspiration, thermoregulation, and dehydration in horses. We’ll also look at electrolytes, which everybody talks about without really knowing what they are.

What is the purpose of sweating?

Perspiration cools down the body. When sweat, i.e. water, dries (evaporates) on the skin, the body’s temperature drops.

This is a very important mechanism because humans and horses, like most mammals, are homeothermic, meaning they have physiological processes that allow them to maintain a pretty stable core temperature. [1] However, not all mammals sweat like we do. Cats and dogs shed excess heat through their tongues, whereas horses sweat from every pore, just like humans.

…and the need to drink lots of water!

Under such conditions, that much perspiration means the horse must drink a lot to compensate for such a huge loss of water. A horse can drink between 20 and 75 L of water per day depending on its size, the weather, diet, etc. To give you an idea, a traditional water bucket is 20 L. Nursing mares can drink an additional 15-30 L per day. [2]

Why giving electrolytes when it is hot?

Electrolytes are what we give horses in hot weather without really knowing what they do ;)! They come in powder or liquid form, in which case they are diluted in the horse’s drinking water. You can also buy an oral electrolyte paste.

But what do they actually do?

The problem is that the body needs all these ions, or electrolytes, in order to function well in general and to maintain a proper water balance. Horse perspiration also contains proteins. If the animal is sweating a lot, especially during an intense workout, protein loss can be significant as well. [2]

The problem with hypertonic sweat is that dehydrated horses, which have lost even more electrolytes than sweat, will have cells that are running low on ions. As a result, the ion concentration inside the cells is lower than normal. However, if a horse drinks a lot of pure water without also taking in electrolytes, these levels will drop even further. The body will always work to maintain the same concentration on either side of the cell membrane. As a result, if a cell is low on ions, drinking a large amount of pure water won’t help the situation—that’s why the horse isn’t thirsty!

In humans, however, our sweat is hypotonic. As our cells lose water, their ion concentrations increase. The body tries to dilute these levels by making us thirsty.

However, be careful. Just because your horse is a bit sweaty after your ride doesn’t mean you should always provide electrolytes! It can even be counterproductive. If your horse doesn’t have free access to water, it can even lead to paradoxical dehydration. That means you’ve increased the ion concentration in the horse’s cells, but it can’t drink enough water to dilute it. The best electrolyte you can give is salt.

The dangers of dehydration

Dehydration becomes a real possibility when it’s hot outside. Let’s take a closer look at what happens in a dehydrated horse by studying two possible pathologies that can occur.

The first concern is hyperthermia. When a horse becomes severely dehydrated, it can no longer sweat enough to cool down. As a result, its core temperature starts to increase, and that can be very dangerous. If it rises too much, the horse can fall into a coma or even die due to irreversible brain damage.

As you can imagine, this condition is more likely to happen when it’s hot. In general, poorly conditioned race horses that run in a hot and humid climate are the most affected. Horses can suffer heat stroke even if they aren’t working out. For example, if a horse is confined in a poorly ventilated place that’s hot and humid, it can overheat. The most common example is inside a trailer. [3]

Hyperthermic horses are generally unable to sweat properly due to dehydration. Before heat stroke sets in, their skin feels hot and dry to the touch. Horses in this state breathe very quickly and have an elevated heart rate. As a reminder, a horse’s normal resting heart rate is generally between 30 and 40 beats per minute. The most obvious sign, however, is an extremely elevated rectal temperature (105 °F-109 °F).

The horse might also seem depressed, weak, and uninterested in food. Of course, it will also likely refuse to work. [3]

The first thing you should do is call your vet and tell him or her what happened. You can take your horse’s temperature before calling to help the vet assess the seriousness of the situation.

If your horse is indeed suffering heat stroke, your vet will probably tell you to bring the horse out of the sun in a well-ventilated area and to either run cold water over its body or cover it with a wet blanket to bring down its temperature. [3]

“If, after ten minutes of rest, the horse’s core temperature doesn’t drop below 102.2 °F, the animal is excessively fatigued and dehydrated.” [2]

Depending on your horse’s condition, it might require IV fluids to “restore proper blood volumes.” [3]

I won’t get into the nitty gritty of biochemics, but suffice it to say that dehydration can lead to circulatory disorders, which in turn can increase the level of lactic acid in the blood.

The issue is that excess lactic acid can result in rhabdomyolysis, otherwise known as tying up, Monday morning disease, or myositis (that’s a lot of names for one problem).

Rhabdomyolysis can happen under any number of conditions, including a long ride after a day off, a lesson that’s too demanding for the horse’s training level, poor diet, dehydration, and the list goes on [4].

Myositis appears rather suddenly during a workout. The horse will become stiff, as if it has a serious cramp. The effect can be either general or local and will typically affect the back and rear legs. The animal might even refuse to go forward if the muscle contractions are extreme enough. These contractions will be accompanied by excessive sweating, which in some cases can be quite dramatic.

First off, don’t make your horse move! If you’re outside, bring the trailer to your horse. Unlike during a case of hyperthermia, you shouldn’t try to cool it off. Instead, focus on warming up the horse’s muscles to help it relax. If the weather is hot, the ambient temperature will be enough. However, if you’re riding in cooler weather, cover your horse with a blanket. Offer water.
Once again, you should immediately call your veterinarian, who will give the animal IV fluids, administer medicines to relieve the pain and help the horse relax, and take a blood sample to confirm the diagnostic.

Those are just two examples of pathologies you might encounter, but there are unfortunately many others. You should always call your vet as soon as you notice an abnormal behavior.

You and your horse are all set to head into summer safely. Don’t forget your buckets, water, umbrella, fan, and thermometer—not to work on your tan at the beach but to be ready to spring into action as soon as you notice the first signs of dehydration in your horse!

Plus, remember that dehydration can also occur in winter when the water is too cold and horses refuse to drink!

Stay tuned for the next article,

Such a very Great information provide, I’m sure most people can take notes from this article. Actually, I got a lot’s of information from your blog which can help to care our horse from dehydrated.