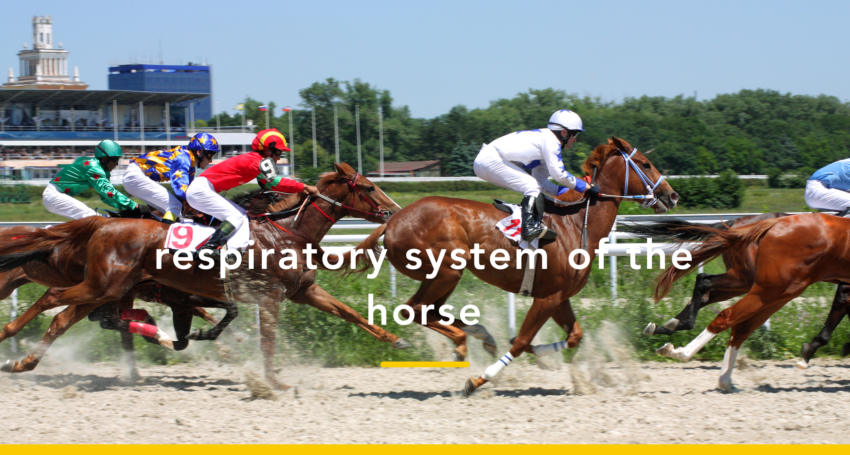 The champs’ vet, Emmanuelle Van Erck, giving you all the insides of how to keep your horse’s respiratory system as healthy as possible !

We might believe that horses’ lungs are extremely large however, they are proportionally as big as ours. Horses’ lung weigh in average 7 kg, corresponding to approximately 1,5 % of their body weight. This is proportionally rather close to human beings for which the lungs weigh an average of 850g.  Therefore, these have a 50L of oxygen capacity against 6 to 7 for human beings.

The main difference being that horses have more than 50 times more alveoli than humans!

This can be observed rather well during inspiration :

However, when comparing horses and bulls having a rather equal body mass it can be seen that horses’ lungs are much larger.  Horses’ lungs are 1,6 times larger than the bulls’. This being the main reason why Marguerite 🐄 would not be able to jump a 130 course 🤣.

#2 -Horses’ respiratory frequency at rest is similar to humans’

Horses’ respiratory frequency at rest is equal to 8 to 15 respiratory movements per minute. The ventilation at rest, meaning the amount of air inhaled per minute is 12 times higher than for humans : 66 L/min for the horse against 5,4L/min.

Based on body weight proportion this means that horses have a ventilation movement of 1,5 times higher than humans.

🔎 Must read: 7 Things to Know About Laryngeal Hemiplegia – Roaring in Horses

Shortly: The ‘dead space’ is the amount of air inhaled that will never get in contact with alveoli therefore, it will not be included in the gas exchange. It is equal to the nose and respiratory tract air volume.

This corresponds to 60% of inhaled air against 30% for human beings !!  Therefore, this simply means that 60% of the air being inhaled is useless for them. Colossal !

#4 – Horses cannot breath through the mouth 🤐

Horse cannot breathe through the mouth due to the length and mobility of their soft palate. The soft palate is the one which ends as a little drop for human beings. Horses have a much longer soft palate which does not allow the connection between nose and digestive tract.

For this reason, horses can only breathe through their nose which can sometimes be very limiting. In addition to that, their nostrils are rather small and their respiratory system is rather thin. Thus create higher resistance when breathing. In order to breath well, they must “force” a little more than human beings.

#5 – The respiratory frequency is linked to the canter stride frequency

If you listen well, while cantering the horse will exhale at the exact same time he puts down his last foreleg.

It is linked to the fact that at that exact moment, the horse “rises his buttock and lowers his head”. All viscera will be pulled forward and will come put pressure on its diaphragm thus, putting pressure on the lungs and forcing exhalation. This can be rather problematic!

Imagine yourself running. Don’t you appreciate being able to breath at your wished rythme? Well horses cannot and we still ask them to go faster.

The main issue being that horses can get “hypoxemia”. This meaning that during long and intensive trainings, they can lack of oxygen.

Even with this issue horses are incredible athletes, this due to having many tricks in their bags 🧙🏻‍♂️!

To counter the lack of oxygen that can often cause problems horses adopt a rather unique strategy: splenic contraction. This meaning that horses are able to contract their spleens. Or to be more precise, adrenaline causes the spleen contraction.

The spleen can then release all its red blood cells into the bloodstream. These can capture more oxygen and bring it to the muscles in order to keep them working! This way, their hematocrit (percentage of red blood cell occupation in relation to the total blood volume) will rise from 30-40% to 60-70% !!! Horses won’t need EPO injections 💉 nor high altitude training 🏔as human beings would 🙄!

#6 – The respiratory capacity cannot be improved on a horse 🏃‍♂️

“It is often thought that training can improve pulmonary capacity due to horses being less breathless after exercising. This is not due to an increase in pulmonary capacity, but due to improvements of the aerobic metabolism, thermoregulation and cardiovascular system.”

To conclude, If we want to be successful it is necessary to take care of our little horses’ lungs and therefore avoid dust from clogging them!

3 How to take care of the horse’s respiratory system?

All respiratory issues start with horses stabled indoors. The issue is often linked to not having enough access to fresh air. They often breath in dust coming from straw, hay, mold and microscopic bacteria and of course ammonia vapors coming from their own secretions. Isn’t all this charming? And cherry on the cake, riders often ride in rather dusty arenas.

If entering the stable there is a heavy and smelly atmosphere it is because the place is not ventilated well enough! A window can already make a difference but a window and a roof opening can help having an even greater air circulation.

Warning : An open window on the manure pile = ammonia overdose all over the place.

The best is to use a dust-free bedding, emptying and regularly disinfecting the stable and think of removing cobwebs. Do not use a blower in the hallway, instead you can water the way before sweeping in order to decrease the amount of flying dust particles. Even Though they cannot be seen, dust particles can stay in the air for a few hours! Highly exposing horses to it.

It is not recommended to keep hay and straw indoors where horses are stabled. Why? Because these are naturally contaminated during harvest by tiny molds that have one and only goal: multiplying. They will do so at a comfortable warm and humid environment. Since hay and straw have a high water absorption capacity and horses produce both heat and water while breathing it creates a perfect mold growth environment. The mold can irritate lungs very strongly!

Horse can suffer from lung damage without necessarily showing respiratory symptoms such as coughing or squealing.  The main symptom will be unusual tiredness and effort intolerance.

In short: “ If you want to become a champion, take care of their lungs! ”

Stay tuned for the next article 😉