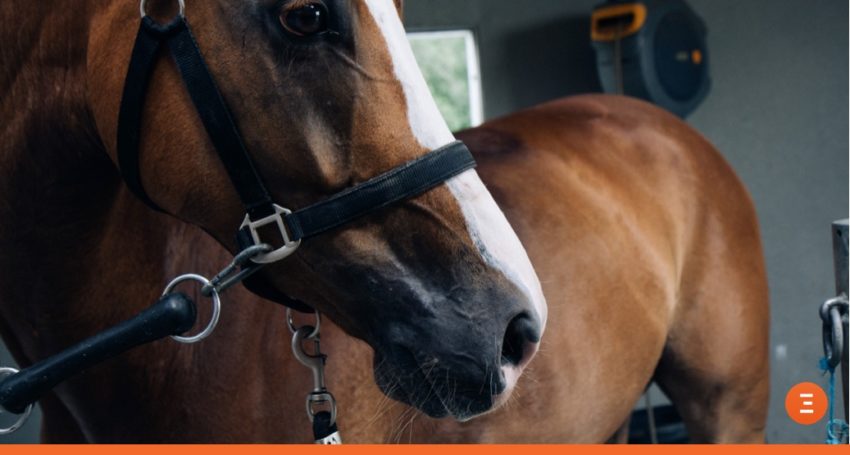 “But what’s that noise!? This being the first question that comes to mind when we call it for the first time. This rather impressive noise usually alerts riders first. But what is it? Is it a handicap for the horse? And what should we do about it? I’ll explain everything!

As I was saying just above, this roaring noise is actually a breathing disorder related to poor conformation or paralysis of parts of the airways.

In fact, it is not just a noise problem. We are facing here multiple problems. The horse can only breathe through his nose, which limits greatly his breathing abilities. In addition, the respiratory system already limits the performance of athlete horses. Indeed, with airways that are not 100% functional, it is a source of significant underperformance.

📚Read more: 6 “Must Know” Aspects of the Horse’s Respiratory System

2 – Horses can only breathe through the nose!

Let’s start with a bit of anatomy so that we understand how horses breathe since it is the key to this issue.

Let’s schematize. Here, in very very simplified, is how the horse’s airways are organized.

The peculiarity of horses compared to humans is that their soft palate is very long! It can therefore block the passage from the mouth to the trachea. While for humans, it is much shorter therefore, allowing the oral cavity and the trachea to communicate.

The larynx, the entrance to the trachea!

Let’s take a closer look at the larynx and especially from the front! Imagine, we are in the pharynx and we are heading towards the trachea. This is how we could schematize it:

In fact, the larynx (in green) is composed of two cartilages called “arytenoids” and the epiglottis.

The arytenoids are two small cartilages that can rotate by contraction or relaxation of muscles. We will here compare them to doors. When the doors open, the air can rush into the trachea.

But then, how do horses eat?

In fact, as you probably understood, the food must also pass through the pharynx to enter the esophagus and to get to the stomach.

When horses eat and swallow, the soft palate rises in order to let the food pass. At that same time, the entrance to the trachea closes with the larynx in order to avoid taking the wrong road. Thus, food passes into the esophagus!

How is this problematic?

The fact that the soft palate is so long is the problematic. Indeed, it is a real constraint for them because they can not increase their breathing rate by breathing through the mouth, as can human athletes.

In addition, in relation to their size and weight, horses’ airways are very narrow. Therefore, creating a great resistance. To give you an idea, each time we divide the radius of the “tube” by 2, we multiply by 10 the resistance to the air passage, especially during inspiration.

So, as soon as there is a problem with the air passage, it is problematic! The lungs already limit in the effort, so if in addition the air circulates badly, it gets even more problematic for the performance.

And as the breathing cavities act like a sound box, it amplifies the noise! Resistance to the air passage becomes audible in certain circumstances such as when exercising [2]. This is the first sign of Laryngeal hemiplegia.

3 – There are different types of laryngeal hemiplegia that can be identified through… noise!

The noise is actually relatively characteristic, although it varies in intensity and timbre. It can be heard when the horse trains. This at trot or canter, when horses increase their respiratory rate and amplitude in order to support the effort.

Depending on the noise, one can identify the origin. A very sophisticated hearing is then required [3]:

Note that there are many diseases with barbarian names likely to cause Laryngeal hemiplegia:

We will treat here only the two most frequent: laryngeal paralysis and dorsal displacement of the soft palate.

In fact, the nerve that controls almost all muscles of the larynx is altered. It causes a decrease in volume of muscles that are supposed to open the “doors of the larynx”. You know, the arytenoid cartilages we talked about above.

This nerve as two branches, a right branch and a left branch. According to the branch of the nerve which is altered, it will be the door on that side which will not open anymore during inspiration [3]. See here:

And there is even a video if you want:

The problem is always on the … left!

These two branches do not have the same path and it is supposed that this would be the reason why paralysis would be more frequent on the left. In fact, it is assumed that there would be greater tension exerted on the left recurrent laryngeal nerve during neck movements.

Most horses suffering from this condition have no clinical signs at rest (except sometimes a weird neigh). On the other hand, they present an inspiratory snoring which shows from a certain degree of exercise and increases progressively.

The problem is that it can cause effort intolerance therefore, counter-performance in competition. Imagine shutting your mouth and blocking your nostrils when jogging. Not practical …

Where those this paralysis come from?

The causes of paralysis are multiple [3]:

5 – The displacement of the palate, another known cause of laryngeal hemiplegia

The dorsal displacement of the soft palate is a very common, especially in racehorses.

What happens in this case?

In fact, the soft palate edge passes over the epiglottis and begins to “float”.

This breaks the tightness between the respiratory tract and the digestive tract. In this case, horses can breathe through the mouth! When it exhales, the air passes under the soft palate and goes to the oral cavity to be expelled. [3]

What are the symptoms ?

Symptoms occur during intense training. There is a roaring or gurgling sound, especially during exhalation, and horses can even breathe with an open mouth. They can then suddenly stop their effort.

Note however that some horses have a displacement only at rest but not at all when training. In this case, the issue is absolutely not disturbing.

Dorsal displacement of the soft palate has multiple causes. Remember that this is a neurological problem more than anatomical.

The main cause is a malfunction of the muscles due to paralysis of the soft palate which then becomes flaccid and likely to pass over the epiglottis.

To reduce the effects of the disease, avoid training on hyperflexion because it is a position that promotes the movement of the soft palate.

6 – What to do with Laryngeal hemiplegia?

There is no alternative but to consult your veterinarian as soon as you hear an abnormal sound. He only will be able to perform a thorough examination and make additional examinations to make a sure diagnosis. The definitive diagnosis is done by laryngoscopy. It is an endoscopy of the larynx. We enter a small camera by the nostril to see what happens, at rest, then when training.

There are treatments for these conditions, even if they are relatively heavy. Indeed, laryngeal hemiplegia may require surgery. There are several surgical techniques whose objective is to permanently maintain the abduction of arytenoid cartilage to allow air to enter the trachea. New techniques are emerging such as laryngeal nerve transplantation.

For Dorsal displacement of the soft palate it is first necessary to identify the contributing causes and treat them medically. We move to surgical treatment if the medical treatment does not work.

Laryngeal hemiplegia is considered as a fatal flaw in France. That is to say that the buyer can claim the cancellation of the sale or reimbursement of part of the horse [4]. However, it must act within ten days after the delivery of the horse. Within this period, it is advisable to call on a lawyer who will refer the matter to the District Court to request the appointment of an expert.

To avoid this kind of pitfall, a purchase visit is recommended.

📚Read more: The 8 things to know about emphysema in horses