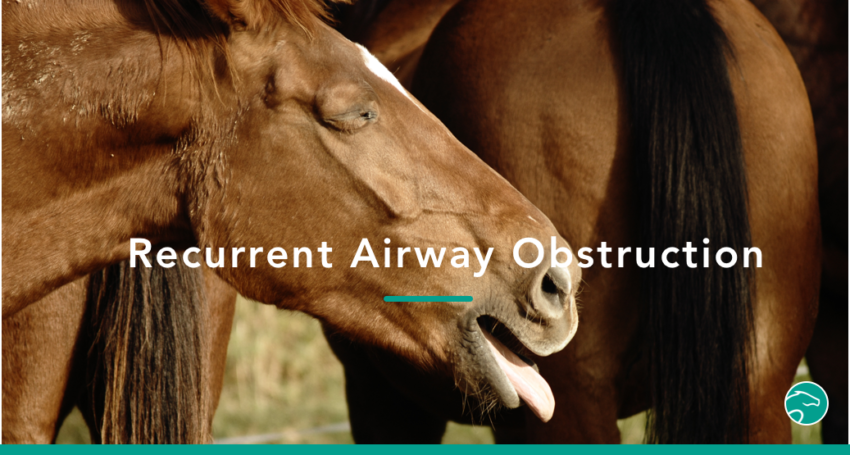 Does your horse cough regularly? What if I told you that it could be more than a simple cough and the beginning of emphysema? 😨 In this article we explain what emphysema is and how to manage the symptoms

My mare was diagnosed with emphysema a few months ago, it all began with recurrent coughs in winter or summer. Last winter she coughed again and this time the treatments did not do so much, my veterinarian made a thorough examination and found that she had emphysema.

Below is a summary from our vet Marine, where she explains what this illness is all about:

“Summer is over and it’s time to put a sweater on before going out for a ride 😩 Horses will now spend less and less time in the paddocks 😢 For some horses, winter means emphysematous cough….but what exactly is emphysematous cough? And how do we comfort a horse who has it? Below we will help you understand the disease better and give you 8 tips to improve an emphysematous horses‘ life!”

This illness has several names: emphysema is the most common but it is also called heaves, equine asthma, RAO (= Recurrent Airway Obstruction).

This illness is defined by the development of an inflammatory response due to organic dust exposure (dust from animals or plants). These dusts can often come from moldy hay and straw.

The cause of the disease is multifactorial, but, researchers agree more or less on an allergic origin because the mechanisms of the disease resemble to asthma in humans.

However, factors related to the horse’s environment seem to play an important role.

2 – The Environment is the Key Factor of this Disease

Consistent dust exposure is the root cause which triggers the symptoms for this disease, however, it is still unknown how each dust components play their roles.

In addition, it has been shown that the airways of horses which are stabled inside are less acidic than normal due to exposure to ammonia (contained in urine) [3]. It has been shown that exposure to ammonia and the resulting dysregulation of pH are associated to the development of asthma in humans. The authors of this study believe that this could be the same in horses, however, this has not been proved yet.

📚Read more: 6 “must know” aspects of the horse’s respiratory system

3 – Coughing is the Main Symptom, but not the Only One

Dust particles of hay or straw contain a lot of mites, bacteria and fungi. Stable dust contains over 50 species of mold! And yes … Yuck! [1].

In a hypersensitive horse (allergic), the immune reaction will be excessive to this environment. When inhaling the dust, their immune system will release inflammatory molecules in an exaggerated way in order to fight the “aggressor”.

Inflammation of the deep airways causes coughing (at rest and/or exercise), but this is not the only symptom. We also observed the following reactions:

Air is then trapped in the lungs causing difficulty to breathe and especially exhaling. It increases the amplitude of the thoracic movements and grows in the abdominal to promote difficult breathing. Also, it dilates nostrils abnormally : we call that the nasal circulation.

There is of course a great variety of clinical signs depending on the severity of the disease. When your horse is at an advanced stage of the illness and can not stabilize their symptoms anymore, they will start observing a “line of shoot”. This relates to a hypertrophy of the external oblique muscles of the abdomen because of their respiratory efforts. It is also possible for your horse to have severe weight loss when the disease has become chronic.

4 – It is a Common Disease in Winter

It is a disease of the northern hemisphere because of temperate levels.

The climate of these regions forces horse owners to keep their horses in stables and feed them roughage, and this is why this disease is a recurring seasonal disease, more commonly observed during winter.

In addition, horses who are kept in semi-urban to urban areas are also exposed to extra air pollution. This can also play a role in the sensitization of emphysematous horses (as it has been shown for human asthma).

In 2007, a large epidemiological study [2] studied the RAO growth in Great Britain, they came to a 14% conclusion. Through the study, it was shown that RAO is the cause of more than 50% respiratory problems which veterinarians are called out to see. [1]. As you can see, this is not a rare disease!

Note that emphysema seems to affect only grown horses and especially horses over 7 years old. Therefore, it is possible that a healthy young horse can develop the disease later on in their life.

Going to the Paddock is Mandatory!

Horses cannot heal completely, but we can stabilize them. Reducing exposure to environmental dust is the key to long-term success. The best solution is to put your horse in the paddock all year, which will generally cause a disappearance of clinical signs.

If putting your horse in a paddock is not possible, try to reduce the horse’s exposure to dust as much as possible by putting them in a well ventilated box away with shavings. Be aware that organic dust is 35 times higher in horses kept on straw beds and fed hay than in horses kept on shavings and fed pellets (large pellets of hay). [4].

However, remember that straw of very good quality contains little dust and does not cause more inflammation in sick horses than conventional shavings, but this kind of straw is quite difficult to find. Therefore, make sure the bedding is always clean in order to limit any ammonia fumes that may (even if not proven) promote the onset of symptoms.

Finally, another essential step is to keep your horse away from any activities causing dust exposure. For example, hay feeding time or the cleaning process of the stable. Passing the blower just under your horse’s nose is a big NO GO. Instead, water the floor before cleaning, this can help reducing dust exposure in the stable.

Obviously, all this is easier said than done! It is not always possible to tell the stable manager how to manage their logistics because of your emphysematous horse.

6 – A Feeding Management Must be Implemented 🍎

Since dust triggers allergic reactions, it is obvious that feeding hay is a risk factor. In addition, horses have the habit of shaking hay with their nose when eating! This propels a multitude of particles in the air that of course does not help the situation. Allergenic components are more numerous in hay and straw which have been poorly prepared or poorly preserved. To reduce these risks, we must have access to good quality products.

📚Read more: 3 things to avoid when feeding your horse

If you have to use hay, you can soak it before feeding it to reduce the amount of dust. Hay soaking time is controversial and you will find durations ranging from 20 minutes to 4 hours depending on the studies. Remember that below 20 minutes is inefficient and above it is effective but it reduces the nutritional value of hay and promotes the development of bacteria and mold. Therefore, 20-30 minutes seems to be a good compromise.

There are now ways to sterilize hay, which eliminates more bacteria than soaking, while maintaining the nutritional qualities of hay. These solutions are expensive but very effective.

How to feed hay is also important, if given on the floor, dust is less likely to find its way up breathing apparatus of the horse due to being upside down. If on the other hand, it is put in height in a hay net or a rack, this favors the inhalation of dust, so please think of feeding hay on the ground!

Individual sensitivity is obvious as most horses on a daily basis are exposed to high levels of dust while a small proportion of them actually develop signs of emphysema.

In this case it is not about the modification of one single gene but probably of several. In addition, emphysema involves a complex interaction between the individual’s genome and its environment. Therefore, an emphysematous horse is more likely to have an offspring with symptoms even though the relationship is a lot more complex than just that.

8 – Emphysema can be a Deal Breaker when Selling a Horse

Emphysema is considered a deal breaker because it can be very disabling for sport horses. Buyers can actually cancel the sale or ask for reimbursement of part of the horse’s price [5]. However, they must act within ten days after the delivery of the horse (Article R213-5 of the Rural Code). Within this period, it is advisable to call on a lawyer who will refer the matter to the District Court in order to request an appointment with an expert.

It is unfortunately very difficult to diagnose the disease during the purchase visit, especially if it is done in summer or if the horse is under 7 years old.

Please remember that it is important to keep your horse in an adequate environment allowing him to stay under symptom threshold. This threshold is individual per horse so you need to have a good knowledge of your horse. When you believe the disease has started, do not hesitate to call your veterinary so he can set up a medical treatment.

So, I’ve followed Marine’s and my vet’s advices. We started with an anti-inflammatory treatment to get through the crisis and then we changed the stable of my mare. She was first in a closed box with straw bedding, had 3 hours of paddock time a day and the stable was in semi-urban area. Now, she is in a stable in the countryside, in an outdoor box, on shavings and above all, she spends her entire day outside, she only goes in at night! And you know what ? She’s great again! 😁 She’s in amazing shape! I thought she was going to retire but now she can work normally again. 😊
So, if your horse is diagnosed with emphysema, do not panic! Follow your vet’s advice and adapt the environment of your horse! Sometimes it is just enough!