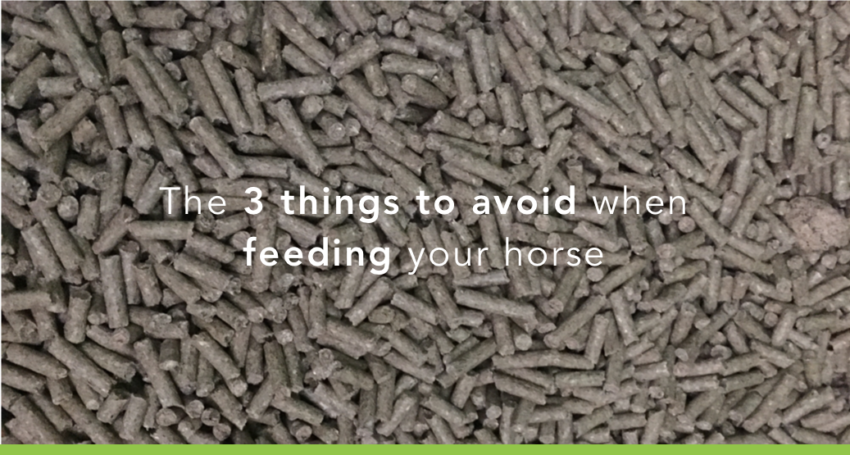 The nutrition and feed of your horse is an important subject for many horse owners. Due to horses having a very different digestive system and diet from ours there are some specific things that you need to avoid in your horses feeding schedule. In this article, we will go through some recommendations and enlighten you on a few key feeding points.

Horses are monogastric (they only have one stomach, like us) herbivores with a very specific digestive anatomy. They have a small stomach and a large and highly developed intestine. Digestion is slow in their stomach and therefore it intensifies in the small intestine through digestive enzymes, then in the large intestine through the bacterial flora.

Digestion begins in the stomach with gastric juices which react on the feed in order to reduce the feed volume. Horse’s stomachs are very small (15 to 18L for a capacity of 10 to 12L only) and the food and saliva which is swallowed represents 50 to 70L daily! Their stomach must also empty itself 6 to 8 times a day.

During a meal, horses can chew twice and only keep the last portion which they swallow. Food stays in the horse’s stomach for a long time which also allows for high actions of gastric juices.

To give you an idea, the stomach allows two thirds of each meal pass in one hour. Then it keeps in the last third for about 5 to 8 hours! Therefore, gastric digestion has significant effects only on the last 10 litres. This represents approximately the equivalent of 2 kg of hay or 4 kg of concentrates.

This is why we recommend dividing your horse’s feeds into multiple small meals (about 2 kg of hay or 3 kg of hard feed) so the hard feed can stay longer in the stomach, therefore promoting gastric digestion and subsequently providing optimal material for the large intestine bacteria to complete digestion.

In addition, horses have an internal biological clock that influences their hunger. It allows them to anticipate their hunger and regulate their metabolism before a meal. This is why feeding on a regular clock represents biological and psychological comfort to them. Obviously, this schedule must take into account daily activities and the distribution of work. => see “To Avoid # 3”

The reason why it is recommended to give hay before hard feed is because of an efficiency concern and digestive hygiene concern. As we now know, your horse’s stomach empties two thirds of each meal in 1 hour and retains the last third up to 5 to 8 hours for a more optimal digestion (see “To avoid # 1”). So, if you feed hard feed before hay, hay will then push the hard feed into the intestine. Hay will last in the stomach for 5 to 8 hours so the gastric juices won’t have enough time to play their role on the hard feed.

In addition, horse’s do not only benefit from excellent oral preparation (which allows them to finely grind food and salivate in quantity) but also rapid gastric transit. However, these do not completely prevent fermentations and indigestion problems.

Therefore, it is necessary to promote the retention of hard feed in the stomach but we must avoid indigestion and dilation predispositions. This can quickly become complicated for horses which manage colic! As you know, horses cannot vomit, so feeding hay before hard feed gives them extra chewing time which therefore allows more time for them to salivate.

Salivation helps empty the stomach and activates the peristalsis (movements of the intestine that advance the food bolus). The aim is to ensure healthy digestive transit speed in order to avoid indigestion and fermentation due to stagnant food. The digestive system is then prepared to digest the concentrates!

In practice, there several possible situations:

When horses are working, it is more comfortable for them to have a slightly filled stomach and a small intestine (try to go running just after lunch, you’ll see …).

Alternatively, your horse cannot fast for too long before exercise because it forces their body to draw on its reserves (that’s why people who wish to lose weight will run before breakfast) but this in horses can lead to gastric ulcers. Therefore, it is better to give your horse hard feed at least 2-3 hours before they exercise (3hours for competition). This takes into account the time required for ingestion and emptying process of the stomach. (See To avoid # 1)

In addition, digestion requires a big amount of blood flow from the digestive tract, which goes against muscles and it also compromises the heart function and thermoregulation, both very important for your horse’s effort while exercising. If the exercises which you do with your horse are large, their body will allocate a larger volume of blood to the muscles, therefore meaning the digestive tract will then be exposed to a relative lack of oxygenation, which could promote the appearance of colic.

E.g.: Icons made by Freepik, Vignesh Oviyan, Kirill Kazachek, Smashicons from www.flaticon.com
“Horse” icon made by Iconic, from The Noun Project