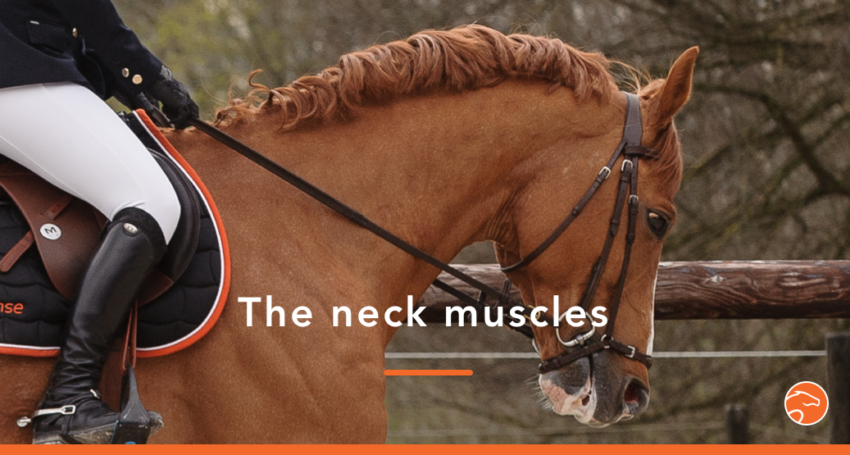 “Wow, your horse’s neck looks so good!! Mine kind of looks like a giraffe… I’m having a hard time building muscles…” Yes!! Who hasn’t ever been jealous of the big muscly necks of high level horses or show stallions? Today, I’m giving you the secret to improve your horse’s neck muscles.

What’s in my horse’s neck?

Have you ever wondered why we learn about horse anatomy? It’s really important to have some basic knowledge in order to work efficiently. So let’s dive deeper into the horse’s neck anatomy to see how to improve its musculature – the right way.

… and not up top as we might think at first! The muscles defining a good looking neck are then located above the cervical spine.

The neck has a very powerful ligament system: the nuchal ligament.

You remember the nuchal ligament? I already mentioned it in the back muscles article.

The nuchal ligament is a powerful and voluminous ligament linking the cervical vertebrae to the first thoracic vertebrae (the withers) in the shape of a fan.

The nuchal ligament has two parts:

The nuchal ligament extends into a supraspinous ligament linking the top (processes) of the vertebrae from the top of the withers to the sacrum.

If I’m mentioning this ligament again, it’s because, thanks to the ligament, the slightest movement of the neck will have a huge impact on the entire body. Indeed, when the horse lowers its head, it will automatically pull up the entire back. This will form a bridge which will make carrying the rider’s body easier and (but…) this will “drag the hind legs back”.

There are 2 big muscle groups affecting the neck. The extensors (above the spine) and the flexor (under it). Yes! The expression “neck extension” is fake, because it’s actually a flexion. 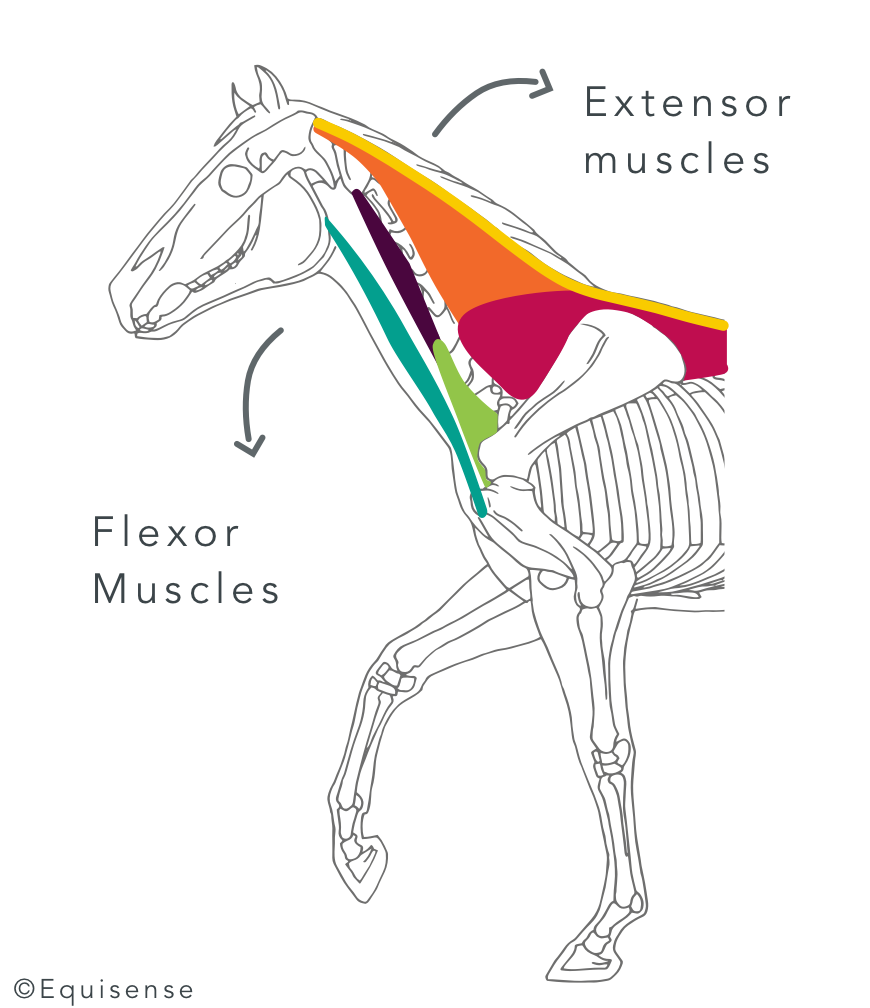 As for the lateral flexion of the neck (the bend), there are no muscles dedicated to this movement. The extensor and flexor muscles will contract in a concentric way on one side only and relax on the other side.

Why should you be concerned about neck muscles?

The neck: a crucial pendulum movement

The neck is really important for the horse’s locomotion. As I was saying earlier, the nuchal ligament induces big repercussions on the entire body when the neck moves.

The neck muscles go hand in hand with the overall muscles

Furthermore, the ultimate goal of a lot of riders is to have a horse that is “light” in your hand, a horse which holds itself. This only comes with harmonious foreleg muscles, so the neck but not only the neck! A horse can’t be light or harmonious without a great musculature around the abs (so the back), the glutes and the pectorals.

The neck can’t be considered on its own, and building neck muscles can’t be a goal as such without considering the abdominal, the gluteal and the pectoral muscles.

Which movements contribute to the neck muscles?

The exercises to build neck muscles have to use the 3 types of contractions. Do you remember? I mentioned them in the article about jumping exercises for muscle reinforcement.

These 3 contraction types are:

Let’s take 2 examples of movement which will help you build neck muscles.

Yep, this one again! It’s a great exercise but you have to do it carefully.

When you do a neck extension, the main muscle group which is going to be working will be the extensor group.

“What?? The horse lowers its head but the upper muscles are the one working??”

Exactly! Why? Because of gravity of course!

In the case of the neck extension, it’s mainly the weight of the head and the neck which is going to allow this extension. The flexor muscles aren’t responsible for it! The extensor muscles will go against the movement to manage the height the head has to stabilize at. They will then contract in an eccentric way, exactly like a drawbridge: to lower the bridge, it’s useless to pull downwards, it’s own weight takes care of that. However it’s important to hold it so it doesn’t suddenly fall with the lengthening of the cords.

However, the extensor muscles (so the cords holding the descent of the drawbridge) open the head-neck angle. So if the neck extension is done with the head-neck angle closed (horse low and round), it’s the flexor group which will intervene to bend the nape, this time in a concentric extension.

There is no good or bad neck height.

Be careful, neck extension doesn’t necessarily mean nose to the ground! The nape slightly under the height of the withers is a good compromise and allows to hold a good engagement of the hind legs. Even so, there is no bad or good neck height. It all depends on the horse and its abilities. Listen to your horse!

Other impacts of neck extension are numerous, notably the development of pectorals (inducing the “withers pull up”) and the work of the abdominals… And it’s an exercise than can be pretty difficult and even painful for horses with physical issues/conditions. It can even be contraindicated for horses with bone or tendon problems on the forelegs because of the overload it induces. Too much tension in the nuchal ligament may also cause injuries on the vertebral spines and too much compression on the vertebrae over one another. It’s important to not force it.

As I explained earlier, the neck doesn’t have any muscles specifically dedicated to lateral flexion. Lateral flexion is actually induced by a simultaneous contraction of the extensor and flexor muscles on the side of the flexion. Bended work allow you to complete what you started with the neck extension by allowing a concentric work of both muscle groups.

The neck holds a central place in the horse’s locomotion. Even so, how beautiful the neck looks shouldn’t be a goal as such but rather a consequence of a well done job. Its development has to be a part of a global muscle development which, let’s just say, takes some time!!

Thinking that your horse has to have its neck as the highest point to build its neck is a mistake that will only rigidify your horse in a high attitude and will make you enter a vicious circle.

Indeed, a horse kept in a high attitude will not be able to use it’s natural pendulum like head movement. The nuchal ligament will be relaxed and the horse’s back will bend. To carry the rider, it will be forced to rigidify its back muscles and will be unable to bend, use its abdominals and engage its hind legs.

It’s useless to pull up the head of a horse which is already unable to move and engage its legs correctly!

Yes, if you want to build neck muscles, you have to start with the basics: managing the gait, the suppleness, relaxation and quality of the contact. These are the first steps in the progression ladder! It’s not a coincidence collecting is the last step 😉

And all’s well that ends well because the basis of locomotion are the subject of one of our programs, available in the Equisense app!

See you soon for another article,