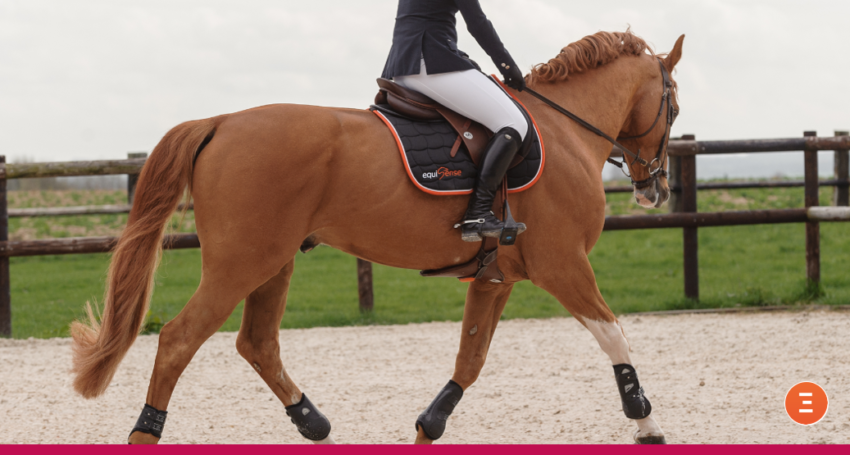 Is it also your great pride to see that your horse has well developed hindquarters? For me it is the ultimate result of good bodybuilding and the sign of a well done job. In this article, I’ll explain you here how to strengthen hindquarter muscles of your horse

After having written on the neck, the shoulders, the chest, the back and abs, all was left was the hindquarters. Let’s see together how to make your horse’s hindquarters well developed.

But, as usual, let’s take it step by step. There are a few things to know beforehand.

Firstly, let’s start by doing a bit of anatomy, but comparing human and horse so that you understand fully.

Thus, their hock actually corresponds to our heel. And their stifle is actually our knee.

However, the horse has a particularity that you must know:

In fact, the reciprocal apparatus is a ligament and tendon system that strengthens the joints of the stifle, hock and fetlock. These three joints are dependent on each other thanks to these two structures: the peroneus tertius muscle that connects the lower femur to the middle of the cannon bone. And the superficial flexor of the finger that goes from the femur to the pastern, passing through the hock.

I didn’t talk much about conformation in the previous articles, but here I find that the conformation of the hindquarters is much more noticeable than the shoulder for example. So it deserves a few words so that you can quickly understand why your horse has a flat buttock, or on the contrary, why he has a pointed croup.

In fact, these different conformations have an impact on the potential of the horses and the difficulty you will have to muscle them, but not really on the way to do it. The exercises remain the same.

I will discuss the importance of conformation in a future article. For now, let’s focus on how to strengthen the hindquarter muscles!

Here is the important part. The muscles of the hindquarters are actually divided into 3 groups:

Their role will therefore be to bend or extend the hock and the fetlock.

I will pass a little bit quickly on their intervention in the different movements.

#5 exercises to strengthen your horse’s hindquarters

All these exercises can be found on our Equisense mobile application! It is free, don’t hesitate to download it on your mobile phone.

And yes, as for us, working uphill and downhill makes for incredible buttocks. You don’t need complicated exercises to strengthen the hindquarter muscles of your horse.
When going uphill, the horse has to use a lot more force to propel themselves forward. It is therefore a very good exercise to develop in concentric contraction the buttocks, especially the gluteus medius (the largest), and the caudal femorals.

Reinback, as I have already mentioned in the article on back and abdominal muscles, is a very good exercise to strengthen the Iliopsoas muscle. So, you will have understood it, to improve the engagement of the hind legs, which is The principle is that it makes it work “in fixed point inversion”.

When the horse moves forward, the fixed point of the Iliopsoas is the vertebrae and ilium (the pelvis). The mobile point is the femur. It will pull the femur forward. When the horse moves backwards, it is the opposite! Indeed, the fixed point becomes the femur, the mobile point becomes the spine and the pelvis. The muscle will therefore have to pull the horse’s body backwards, which is much more difficult.

To picture this exercise, imagine you are lying on your stomach at the end of your bed, your arms hanging in the air and mimic the movement of push-ups with your arms. Too easy! Very roughly, in this case the fixed point is your body and the mobile point is your arms. Now really do push-ups. Now it’s a little less easy… because you’ve inverted the fixed point (your hands) and the moving point (your body). Reinback is the same principle.

Also, you can combine reinback with a fast trot start to make it a “plyometrics” exercise. It works the explosive power of the muscles by quickly linking concentric and eccentric contractions. So it’s a great exercise to strengthen the hindquarter muscles.

Reining back trains the psoas-iliac, the femoral caudals and the gluteus medius in a very intense way! Even more when followed by an energetic start at trot.

To do this, go on a small obstacle at walk. The obstacle should be really small at the start, then make it higher as your horse understands the exercise. Be extremely flexible in your hands (almost do it with loose reins). The jump will likely be quite strong. Consequently, don’t hesitate to hold the mane at the beginning.

Jumping from walk helps developing muscles of the buttocks in volume and makes the horse gain in explosiveness!

The hind legs will therefore “move back more”, making the gluteus medius, femoral and caudal leg muscles work. They will bend harder and will have to go forwards, working the iliopsoas, cranial femorals and cranial leg muscles. This all together will allow to strengthen the hindquarter muscles.

It is a very good routine exercise to do almost without moderation! Raised staggered poles help accentuating the movement of the limbs.The limbs have to flex more, move more forward, and more backwards. It’s great for the hindquarters in general.

Finally, lateral movements are perfect for working on adduction (pulling the leg inwards) and abduction (moving the hind leg outwards). Therefore, they will allow the development of the medial femorals (those in the inner thigh), which will act as adductors. And the gluteus medius accompanied by some cranial femorals which play the role of abductors!

Lateral movements are great to strengthen the buttocks. Indeed, they will develop the muscles of the inside of the thigh.

Not all lateral movements make the muscles work in the same way. However, all of them are good for a complete training!

Here are the exercises you can do to strengthen the hindquarter muscles of your horse. Send us pictures when your horses have a “bulging butt”!