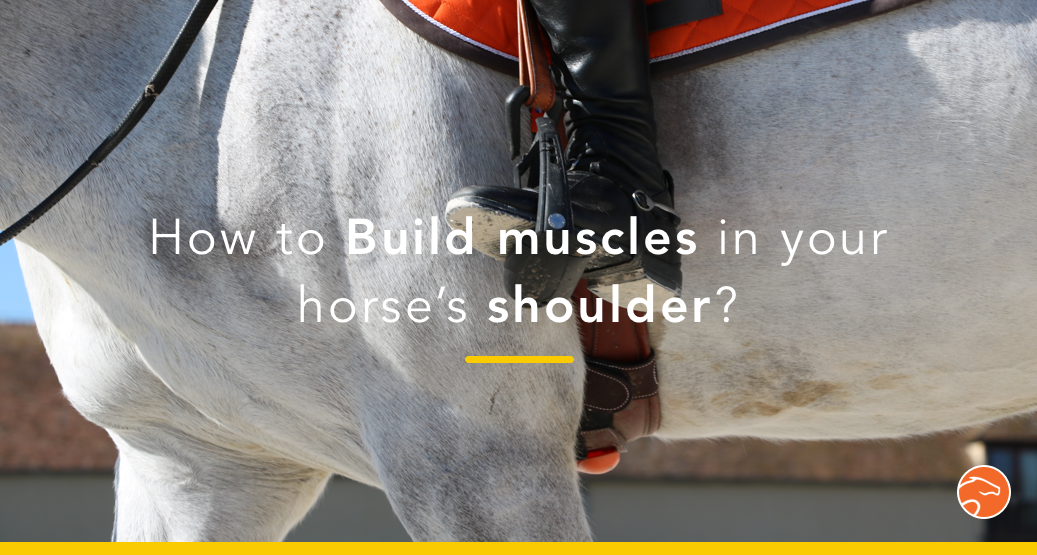 Now that we’ve worked on several muscles in our horse’s body, our horse looks like it drank one too many protein shake! But we still have one thing to work on: building up shoulder muscles! 😊

What exactly are we talking about? The shoulder, the foreleg or the forehand? It’s important to be accurate because we have a tendency to use these words to talk of another. Let’s clear things up 🔎

When we started riding and learned the horse’s anatomy, we divided the horse in 3 parts: forehand, body, and hindquarters.

⚠️ Despite it being located on the forehand, the chest belongs to the horse’s trunk.

The foreleg doesn’t start below the elbow. It’s not just the leg. It also includes the scapula (shoulder blade) and the arm.

If we list the different bones of the foreleg, we have:

Lastly, the shoulder corresponds to the articulation between the scapula and the humerus.

If this was strictly about shoulder muscles, we would then only be talking about the muscles designed to move the scapulo-humeral articulation.

Rather, we’re going to be talking about foreleg muscles and more specifically about the upper part of the foreleg.

The foreleg can be divided in 4 big categories:

Let’s observe these categories in details and figure out how to build up muscles in them.

Learn more: No abs, no back!

✅ Muscles that move the whole leg

These muscles are the protraction and propulsion muscles.The protraction is the moment of the stride during which the horse stretches its leg forward to gain some ground. The muscles used in this phase belong to the neck because they are stretched between the head and the humerus or between the cervical vertebrae and the scapula. We can easily distinguish the brachiocephalic muscle located at the lower part of the neck that enlarges when your horse scratches the ground 😅.

The propulsion muscles will drag the lag backwards and in doing so propulse the body forward. They are very powerful and pretty broad. We can count amongst them the ascending pectoral.

During the protraction and the propulsion, other muscles will play their parts as well. They are specific muscles from other regions. Let’s see which ones.

They are the ones who will put the articulation between the scapula and the humerus in flexion and extension.

The deltoid and infraspinatus muscles also are abductor muscles, which means they will pull the leg to the outside!

They are the ones we think about when we try to imagine a horse with a well-muscled shoulder.

Their action will be to open or close the elbow, and in doing so to bend or extend the forearm over the arm.

A notable muscle is the triceps brachii which is the very voluminous muscle above the elbow. It functions as an extensor and helps a lot during the propulsion.
It’s antagonist is, as it is for us, the biceps brachial which closes the elbow.

The are the ones who control the movements till the end of the foot thanks to their long tendons ending on the cannon or in the foot.
The cranial antebrachium are extensors that contribute to the protraction. The caudal antebrachium however are flexors and contribute to the suspension phase or the “touching the ground” phase to maintain the fetlock.

Which exercises to build up shoulder muscles?

You understood from the descriptions, we’re going to play with the leg’s flexion and extension amplification to build up muscles (so on protraction and propulsion), but also on abduction and adduction!

If eventing horses have such impressive forehand muscles, it’s in part thanks to this.

Going at canter on a bigger range than in an arena allows the horse to work on its protraction muscles: they have to reach further, and the propulsion muscles have to push the horse hard enough to keep the same speed.

A sloped ground will accentuate these impacts. Propulsion is harder uphill, and the triceps brachii, the ascending pectoral or the latissimus dorsi have to work harder. Downhill, the extensor muscles works in eccentric contraction, in opposition to the movement.

By the way, if you have uphill or downhill banks at your stables, it’s the perfect time to work on eccentric contractions!

Raised ground poles at each gait will allow the horse to exaggerate its normal leg movement during the stride.

It’s a really good routine exercise to execute without moderation, with a soft hand!

Learn more: What does a bit do in the horse’s mouth?

Lastly, lateral work is perefect to work on adduction (pulling the leg inwards) and the abduction (spreading the leg outward). These exercises then allow the infraspinatus and the deltoid to develop.

Every lateral movement makes a different muscle work, but they are all good to use for a complete workout!

Now that you’ve read a few articles on this blog you’ll notice these exercises come back often. As do backwards walk, bounce jumps or jumps at walk. You might wonder why? Because they are simply perfect to build muscle in the entire body! And if your horse has no physical issue to execute them, don’t hesitate to do them on a regular basis! You’ll see the advantages quickly 💪🏻

See you soon for another article,
Camille Saute,
R&D leader at Equisense

Here’s the only way to Improve your Horse’s Fitness
4 Training Exercises to Improve Your Horse’s Propulsion
5 Jumping Combinations you can do with Few Equipment
Which Distance Should I put Between Ground Poles or Fences?

This was a really good article! Thank you. I think I’ll try this on my horse.

Thank you for your feedback! I’m glad you enjoyed 🙂